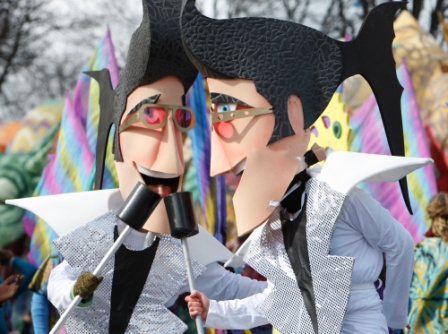 Since 2003 Artastic have created a pageant spectacle for St Patricks festival parade in Dublin, using a variety of community groups along with our talented artists. This blog will describe in brief of a spectacle along with credits to those involved in the year 2008.

This is now stepping back a few years but we like to keep a record of our work, and their is a special personal story that goes with each of the parade for those involves so we wanted it to act as a trip down memory lane for anyone who wanted it.

It’s back – the competition you have been waiting for, including every watery wannabe, drippy diva and showy shellfish in the ocean. Starfish in your Eyes will embrace some of the most notorious Reef Groovers: the Seahorse Gospel Choir, the Sole Sisters and the current title holders – The Kings of Coral “Elvish”

Saorise Kearney, Amber Short and Kinkari Bateson who all the Queens of the Sea.

Kinkari Bateson Fly’s in each year from Wales, just to be in the parade.